If there is one thing, more sacred than make up and clothes, that is family ! And as 4 of my relatives were visiting me from Paris the last 3 weeks, I did not take the time to write, hence my absence here. I did have the time to shop though, and here are 2 little treasures I found at Lush. 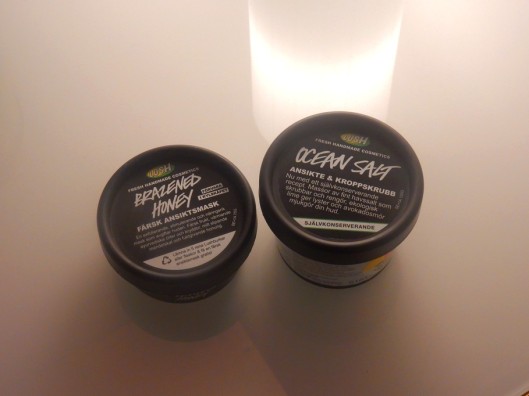 I already had a scrub from Lush that I previously mentioned here (it was actually my first review!) but I bought a new one called Ocean Salt. That scrub literally smells like margarita ! It has coarse salt in it to scrub gently the skin and open the pores, lemon juice to cleans the pores, and even vodka ! Yes my dears, vodka, that disinfects and helps against blackheads and blocked pores. It is slightly aggressive, and stings a bit so it was advised to use it only once or twice a week, as opposed to the Dark Angels that you can almost use on regular basis. It also contains fresh avocado and coconut, to smoothen the skin and moisturize it after attacking the pores. It is white-ish with some blue stains in it, and feels kind of like wet sand on your hands. 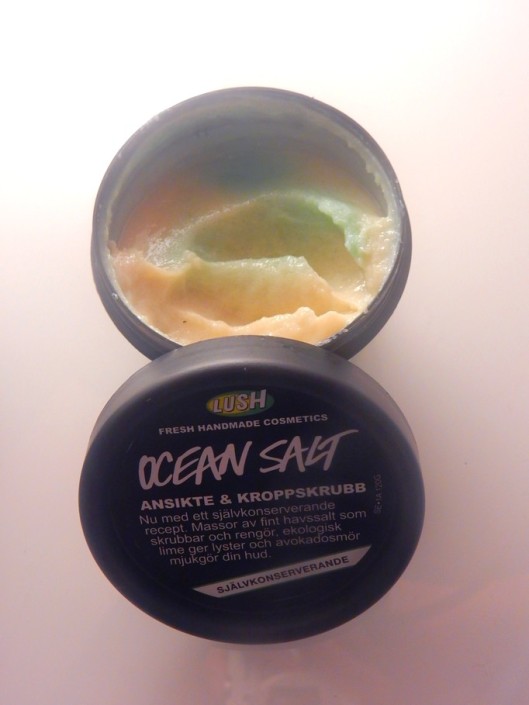 I read funny things in the reviews, like “it’s too salty”, “it stinks like sea water”, or even “don’t put on your mouth it tastes like salt” … People are funny aren’t they ? :) As for me, I love this scrub ! I have used it twice already and it leaves my skin very fresh and smooth, while removing as much dirt as possible.

After scrubbing your face, what you need to do is apply a mask, so the pores don’t stay open, waiting for new dirt to fall right in. I bought one called Brazened Honey. 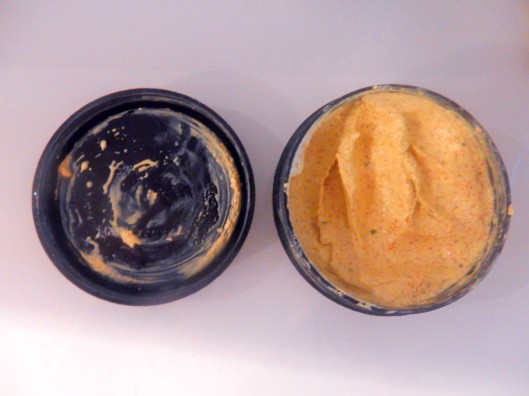 The Brazened Honey also contains tones of natural elements such as honey (duh!) but also ginger, lime, egg, parsley, coriander, turmeric, fennel, sage and rosemary. No it’s not a stew, I’m still talking about a face mask ! It is mustard-yellow, and smells very strong, like a big spicy veggie stew. As a fresh mask, I was advised to keep it in the fridge, and use it within 2 weeks, every other day. I apply it in a thin layer and together with the scrub it helped tightening my pores, getting rid of little annoying blackheads, and making my complexion brighter and smoother

( I took a picture of myself with the mask on, thinking that you can’t die from being ridiculous, but on second thought I think you can, so I will not post that picture)

I hope you guys found these reviews interesting, if you have any opinion on these products, or any advice about other products of that kind, let me know :) Good luck for the coming week, bisous bisous :*

First I would like to say that my camera works in mysterious way. It has been super sunny all afternoon so I thought now is the time to take pictures, with that great light they should be great ! Duh … Anyway, I wanted to tell you a bit more about the British brand Soap & Glory, that I already mentioned here. My lovely Mom brought me a few samples from London and I have been very happy about most of them. Look at how simple and efficient these packagings are! The pink ones are super girly, and the white ones are all shinny. The logo of the brand is simple but catchy. They play the Vintage card and they definitely master it.

The Endless Glove one is like a very thick hand cream that leaves them smooth and hydrated. Too rich to use during the day, because your hands would stick to whatever you touch or grab, it is perfect to use for a little hand massage when watching TV for instance, or before going to bed. They call it a hand-mask, I honestly don’t really see how it is a mask, since you do not need to rinse it off. It smells like fresh grape fruit and its silky texture will leave a very nice feeling on your hands. The other one, Hand Food, is actually an oil-free hand cream, so that one will be perfect to have in your handbag. Its shea butter and macadamia oil composition will sooth your dry hands. It s written “marshmallow fragrance”. I do not agree with that but it does smell gorgeous and clean. Needless to say, I hope, that you have to wash your hands before applying any hand cream, otherwise it’s like getting up in the morning and putting on lipstick before brushing your teeth … Eww !

The Greatest Scrub of All, is actually not the greatest scrub that I have ever tried. It does its job, and is efficient when it comes to scrubbing, however it may be a little bit too aggressive and my skin got a bit dry after using it 3 days in a row. It says that it is a daily cleanser, but maybe if you use it every 2 or 3 days, or if you have a really oily skin, that could work ? I’m going to try that now. What I do like about it, is it’s super shiny texture, like they crushed pearls and added them to it. They do write that it contains diamonds … Yeah yeah … The smell bothered me a bit, as it smells like a cleaning product, I guess it’s super chemical, so purists and organic people, that will not be for you. 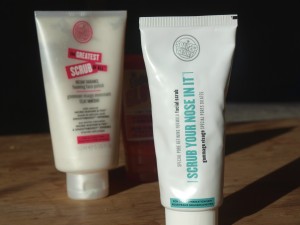 The other scrub my mom brought me from London is the Scrub your Nose in it. And THAT, my friends, is the greatest scrub of all ! To use only on your T-Zone, apply that blue paste and massage your face with it. You will feel a super fresh sensation, almost as if you had applied tooth paste on your nose. It does scrub but very softly. What I do is I apply it in the shower, then wash my body and rinse it in the end, so it stays on for a couple of minutes. Thanks to the clay and the AHA (fruit acids) it contains, it will make miracles when it comes to refining and detoxing your pores, and you barely will need a face primer to apply before your make up.

That brand is mainly sold in the UK but if you look carefully I think you can find some of their products on Amazon or other websites. And to make you forget that today is Monday and we’re starting another 5 days of work, here are some pictures I took yesterday at the sea. Bisous bisous, have a great week ! :* 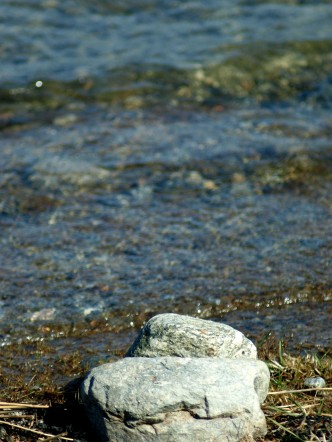