I finally had some time, last Wednesday, to use some of the make up I bought from Inglot. Everyone, when I said I was going to Poland, told me to go straight to that store and buy everything I could grab. So I went there and spent 1 hour and a little fortune in the shop.

On the above picture is a part of my haul, the powders. You can compose yourself the palettes, choosing exactly what you like. The one bellow I composed for contouring (duh!) with 1 matte bronzer (it’s actually a shade lighter than expected but I’ll probably use it for contouring my nose then), 1 matte … banana powder ? It is mattifying, but brings out color in the same time, really enhances the blush, and gives peps to your skin ! Then an old, slightly shimmery pink blush, giving fresh tones to your cheekbones, and a matte darker almost red pink blush, that I barely use on the downside of my cheekbone.

This is what we get :

For the eyes, I mainly used the eyeshadow palette on the right of the picture. Light orange everywhere on the lid, when bright orange on the mobile lid, blue on the crease and over the lashes, and plumb-ish over the crease to reinforce it (doesn’t show really on the picture, but I swear, the plumb was there!). For the lashes, my super duo of blue mascaras, that I already mentioned here and here. I think orange lid and blue lashes are just wonderful together, don’t you ? 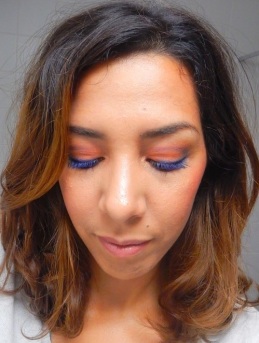 These 2 pictures were taken the same day (last Wednesday), but not in the same place, hence the difference of light. During the day I had a pink nude lipstick, the Asia by Rimmel, and in the evening, the Cinnamon Bronze by Revlon. Which one do you like best ?

1 thought on “The Doors – Love Street”