I have not written in a long time and there is a reason for it, that I will explain in the end of this post. Today I wanted to introduce you guys to some Egyptian cuisine, some food that I have eaten all my youth and learnt how to prepare so my kids and grand kids can also have a taste of that wonderful and generous culture. The dish from today is called Kobeba, which is kind of a meat pie, a mix of minced meat and bulgur, with spices and flavors that bring me back home into my grandma’s kitchen. 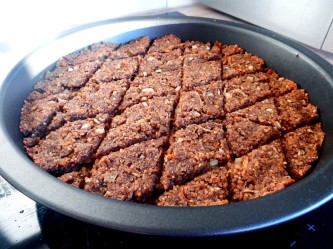 First pour in a big bowl, 3 glasses of bulgur and 3 glasses of water, and let it soak for 30 minutes. Meanwhile, stir fry 1 and a half onion with 400 gr of minced meat. Add to that salt and black pepper, pine nuts, 2 or 3 spoons of allspice, aka Jamaica pepper (tastes like cinnamon / cardamom / nutmeg / clove in the same time!) and some laurel leaves to remove later, but just to add some flavor to the meat.

Go back to your soaked bulgur, and add to it, another 1 and a half onion (mixed this time, the thiner the better), 200 gr of raw minced meat, some allspice again, and a few spoons of olive oil. Just knead the whole thing with your bare hands and keep adding oil until it gets sticky and keeps the shape of a ball, at least roughly.

Now, this is going to be difficult to describe, but not so much to do. First, take a big mold, or a tray for the oven that has some depth, and oil it. Now take a handful of that bulgur + meat paste, and flatten it between your hand, so it is around 1 cm thick, and put it into the mold. Do it again until the whole mold is covered in paste, and add some more where there are wholes. Sorta kinda …

Add the meat + onions that you had previously cooked, over that first layer of bulgur, just poor it all this time, and even it out, and then create another layer of bulgur the same way you did. I’m sorry there is no way I can describe the technique better … With a knife or a flat spatula, slice the whole “cake” into rhombus shape, as you can see on the picture. Add some oil again over the top and even it out, and you can also add some sesame if you want. And in the oven, 50 minutes for 180°.

You can eat it with some Tehina sauce (the white sauce that goes with falafels) or with a salad, warm or cold. I hope you enjoy that dish as much as me !

I also want to finish this post by mentioning something that I was hesitating writing about, because it is has nothing to do with what my blog is about, because it is very personnal, but because I cannot pretend it did not happened. My dear grandmother Hélène Lea Chamache Cohen died on the first of June. It was four Mondays ago but it still hurts as much. She fought against cancer and was brave, humble and courageous until the end. I could not write anything on this blog because everything else seemed so futile and pointless, and I still feel so very lost without her. I loved her infinitely, and I miss her even more. But I know that she liked to read my blog, she was proud of whatever little achievement I accomplished, and she wanted me to be happy and to do things that makes me happy. Therefore I continue writing, and I chose her recipe to start again, but I wanted to pay a tribute to the most caring and inspiring lady I ever was lucky to meet and love.

2 thoughts on “Chef’Special – In your arms”